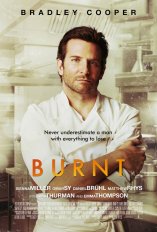 First of all, what a great title, I love double entendre. How great is it? burnt like an over-cooked something and burnt like a low bottom drug addict or alcoholic on the edge of despair, way cool. I didn’t want to see this movie. My wife invited me when it first came out in October 2015 and I politely passed. It had received less then glowing reviews and it was a movie about a chef and the art of high end cooking. After she saw it she proclaimed that it would be a great Movie Night movie for my program. I still wasn’t thrilled but after 61 movie nights I did think that she did have a good idea of the kinds of movies that I looked for. I waited for its Red Box release and keep my word, and I was glad I did. Once again, not that I needed another illustration, my wife proved that she is oh so smart! And she didn’t rub her rightness in my nose at all. She just took my thank you with a smile and moved on.

It really wasn’t about cooking at all on a subterranean level. What it was about was a dry drunk, drug addict and sex addict whose self-will was going to kill him and once again lead him to hurt the people who cared for this un-treated addict. He presented back in their lives as a new man with two plus years of abstinence from alcohol, drugs and woman. The key word there is “abstinence”, it’s not the same as sobriety. This movie was an exquisite example of the AA expression “half measures avail us nothing” and “self will run riot”. His outrageous arrogance and Napoleon type ego were still very much intact. He was way out of control right from the very start. His prior humiliations did not lead him at all to humility. Plainly put he needed more research and development. Men plan and God laughs! And he got it.

Without giving away too much of the movie [mini spoiler alert], the story begins as Bradley Cooper’s character is in the back of a low rent oyster bar in New Orleans shucking them and keeping count. Nothing high end about it. It was nothing more than the manual low end of the food industry. His keeping count of how many oysters was his way of doing pentanes and keeping score, kind of like seven Hail Mary’s and four Our Fathers in the Catholic Church. The moment he got to 1,000,000 he got up, didn’t say a word, took off his apron, put down his knife and left. Right there in the middle of his work shift without a word of thanks to anyone for the opportunity. Now that’s the integrity of an addict. Selfish and self-centered to the core. He equated menial work and a million whatever’s to recovery. The truth is he just tried to out run who he was and the wreckage that he left behind. As we hear all the time in any 12-step meeting, that strategy for happiness is doomed to fail, and it did. It says in the big Book: “some of us have tried to hold on to our old ideas but the results were nil”.

The other glairing theme was his inability to trust and ask for help from anyone. His isolation even in the middle of a huge and bustling environment left him dazed and confused as his life unraveled again, this time in front of our eyes. And we all saw it coming! It says in the AA Big Book that “our troubles we think are of our own making” and that “knowledge of the addiction is not enough to fix it”. Sad but true we got to see it again.

I loved the movie, and yes it did make want to eat, but then again I loved all of the now 62 movies I have shown. Bringing 30 plus men together to break bread, to laugh, to cry and find hope always leaves me feeling filled, kind of like sitting at a banquet table. I am blessed with abundance!

If you think you might want to taste this kind of joy for a change and star to leave the dis-ease behind feel free to contact me. You don’t have to believe that this will work for you, all you have to do is believe that No More Secrets has worked for others! And remember like I always say: misery is optional!

Stay safe, sane and sober and have a great March. Call!

An introduction to No More Secrets