As I have often said about sex and love addict couples, they marry each other for all the right-wrong reasons. This premise has been around since time immemorial and helped fuel the pen of many amazing playwrights from Shakespeare to Edward Albee. And yet with all the historical evidence of an impending disaster the “ism” continues unabated. Once again lending credence to Albert Einstein’s definition of insanity as “doing the same behavior over and over again expecting a different result”. The focus of this installment of my No More Secrets  Blog has to do with two local sports heroes and their collective collision course with a destiny of desperation not that unlike the late Whitney Houston and Bobby Brown.

I awoke last week to read a story in the Chicago Sun Times about Washington born soccer star Hope Solo and her latest fall from grace. This is what the headline read: Hope fading for soccer star Solo Posted: 01/24/2015, 01:28am | Rick Telander: 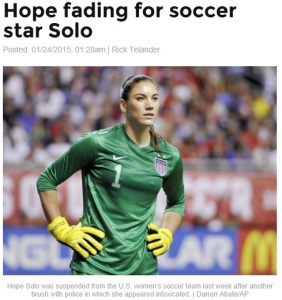 “Hope Solo was suspended from the U.S. women’s soccer team last week after another brush with police in which she appeared intoxicated”. The story continued saying “WHEN PEOPLE PAIR UP FOR LIFE, you hope that each part makes the other better. But, as we know, this often doesn’t happen. Thus, I worry about Hope Solo. The skilled goalkeeper for the U.S. women’s soccer team, which is preparing for the World Cup this summer, has been on a seemingly downward slide since she started dating former NFL tight end Jerramy Stevens, to whom she now is married. On January 19, 2015, Stevens was arrested in Manhattan Beach, California for suspicion of DUI. As a result of this incident, Steven’s wife Hope Solo was suspended for thirty days from the U.S. Soccer team for showing poor judgment in entering the car and arguing with the police. After this latest incident, she was suspended from the U.S. club. Coach Jill Ellis said in a statement, ‘‘We feel at this time it is best for Hope to step away from the team”. I do appreciate the writer’s story.

Last summer, Solo was charged with fourth-degree domestic violence after a brawl at a family event. And though it might seem funny that she allegedly belted around her half-sister and her 6-9, 280-pound teenage nephew, both those people, according to a report in the Washington Post, ‘‘had visible injuries.’’ Moreover, the arresting police said Solo appeared ‘‘intoxicated and upset.’’

The trial, scheduled for last week, never happened because the judge dismissed the charges against Solo based on a lack of cooperation from both alleged victims. A reasonable person could assume the family didn’t want any more embarrassing facts coming out. But had Solo been convicted, with all the negative hoopla these days about domestic violence — by man or woman — she could have expected to spend time in jail and likely be dropped from the U.S. team forever. Some of us were reminded of her statement in a 2012 ESPN The Magazine story that she showed up drunk for a 2008 taping of the NBC ‘‘Today Show.’’

My lenses go a little deeper than the newspaper article. So here goes. Hope Solo was born in Richland, WA on July 30, 1981 to Judy Lynn and Jeffrey Solo. Her father, an Italian-American Vietnam War veteran, who was in and out of her life as a child and teenager, taught her how to play soccer at a young age. When Hope was seven, her father picked her and her brother Marcus up to go to a baseball game in the nearby city of Yakima, but ended up driving over three hours west to Seattle, where they stayed for several days at a hotel. Solo described how it seemed like a vacation at first, but she soon knew something wasn’t quite right. Police later found them at a downtown bank and arrested Jeffrey for alleged kidnapping. Although her parents had divorced when she was six and she lived with her mother, Solo maintained a close relationship with her father after re-connecting with him during her college years at the University of Washington. He continued to be a major influence in her life until a heart attack resulted in his sudden death in June 2007. As it says in the Alcoholic Anonymous Big Book on page 82 about a story of a man coming out of the Cyclone cellar to see his home in ruins says “Don’t see anything the matter here mom, ain’t it grand the wind stopped blowin”. Denials a bitch and the truth is that this event was predictable.

Solo is married to former American football player Jerramy Stevens. They have been together since mid-August 2012 when Solo returned from the Olympics. On November 12, 2012, Stevens was arrested on investigation of assault following an altercation that left Solo injured. The following day, Stevens was released after a judge determined there was not enough evidence to hold him. The pair were wed the very next day, November 13, 2012. Yes you read it right, they got married the day after he got arrested for beating her and yes they had only dated for less than four months! Romeo and Juliet did their thing in four days but that was fiction and she was 14! Since their wedding day there have been three police involved incidences in 27 months of marriage. Can’t wait for the next installment of this continuing soap opera.

So what also did she know about Stevens the day before she married him? Jerramy Ryan Stevens (born November 13, 1979) is a former American football tight end. Stevens was born in Boise, ID and grew up in Lacey, WA. He played college football at Washington and was drafted by the Seattle Seahawks in the first round of the 2002 NFL Draft. Stevens played for the Seahawks from 2002 to 2007 and for the Tampa Bay Buccaneers from 2008 to 2010. That’s the good sports resume.

During his senior year in high school, he and another student were accused of beating a schoolmate over his head with a baseball bat and stomping on his face on June 2, 1998. The victim suffered a broken jaw and ate with a straw for six months. Upon questioning by authorities, Stevens initially denied being involved in the fight but admitted his wrongdoing later. Stevens was charged with felony assault and was ordered to home detention while awaiting trial. Because he tested positive for cannabis during home detention, Stevens spent three weeks in Thurston County Jail. Three football coaches at the University of Washington wrote the trial judge affirming that Stevens’s scholarship offer was still valid, and the judge allowed Stevens to participate in training camp with Washington even though Stevens violated home detention orders. As a result of a plea deal, Stevens was convicted of misdemeanor assault and received credit for time served.

On July 27, 2000, Stevens was arrested for the sexual assault of a 19-year-old female University of Washington student. In the early morning hours of June 4, 2000, after a fraternity party, a UW student who witnessed them having sex called 911 to report it as a possible rape, noting that the woman appeared to be drugged; the caller described her as “half passed out” and with “eyes glazed.” Stevens’ semen was found in the victim, who was penetrated vaginally and anally, and numerous witnesses testified that she acted as if drugged at the party. Police suspected a date rape drug was given to the woman at the party, but blood samples were taken too late for testing. The Seattle Police Department and King County prosecutors clashed over conditions on interviewing Stevens after Stevens’ lawyer Mike Hunsinger negotiated a deal with prosecutors on the following conditions for the interview: defense lawyers would be able to see victim and witness statements, the interview was to be set in Hunsinger’s office, and only the prosecutor, not lead detective, would be allowed to ask questions. Police and prosecutors never interviewed Stevens. Ultimately, King County prosecutor Norm Maleng declined to file rape charges against Stevens due to “confusing and conflicting statements.”

In 2003, the accuser filed a civil suit against Stevens, the University of Washington, and the Sigma Chi fraternity at Washington. In 2004, the parties reached an out-of-court settlement, pursuant to which Sigma Chi and Stevens made a payment of $300,000 in exchange for a number of concessions, including the dismissal of the University of Washington as a party. The investigation and aftermath of this incident and the subsequent decision to not charge Stevens were first reported by The Seattle Times in a special January 2008 series investigating some players in the Washington 2001 Rose Bowl championship team.

On April 29, 2007 he signed with the Tampa Bay Buccaneers. He caught his first touchdown pass as a Buccaneer on December 2 (Week 13) against the New Orleans Saints, a four-yard reception from Luke McCown with 14 seconds left in the game in a drive that clinched a 27-23 victory for the Buccaneers and the teams’ fourth straight win. However, the NFL suspended Stevens for one game without pay on December 11 for a violation of league substance abuse policy.  On June 4, 2008, Stevens was suspended for two games and fined three game checks after violating the NFL’s substance abuse policy.

Stevens had additional traffic violations and other issues added to his “rap” sheet. All in all can Hope really say but she didn’t know!

Looking at the data, Stevens history makes OJ and Bobby Brown seem like a choir boys. So now the question is, will the powers at be finally force him, her, them to get the help they need? Sounds like an inpatient stay for substance abuse would be a good place to start. How about some DV treatment and Anger Management for the both of them. And then when they’re both stable they can each do a run at the Meadows at Survivors week. Chances are that my prescription will never happen. Between lawyers, court systems and the mental health community that just doesn’t get it, they will never get the real treatment they need. And yes she is a sex and love addict. What other possible answer could it be? I doubt whether she’ll every end up at the two meetings a week at the University of Washington, where it all started. So all we can do is wait for this latest installment to come and go, while forgetting about them for a while before their names pop up in the media again as the entire cycle begins again. All this while the world watches and looks at the train wreck in slow motion. As I always say, misery is optional.

I lost a battle buddy and a friend this week. Reading the headlines made me sad.  Former Mavericks’ center Roy Tarpley has died at age 50. Cause of death was not immediately known Friday night. Tarpley, was a star center, whose NBA career was cut short by drug abuse. He was suspended by the NBA after five games in the 1989-90 season after being arrested for driving while intoxicated and resisting arrest. In 1991, he drew another suspension after a second DWI arrest and, a few months later, had a third violation and was banned from the league for violating the NBA’s drug-use policies.

Former All-Star point guard John Lucas tried giving Roy Tarpley the ultimate assist in Tarpley`s bid to recover from drug addiction and make it back to the NBA. Lucas, was at the time the new owner of the Miami Tropics of the United States Basketball League, signed Tarpley for the 1992 summer season. Lucas said at the time that he wasn’t not taking a chance on Tarpley. He`s giving him one. It just might be Tarpley`s last and it was. Unfortunately John’s chance didn’t stick and Roy never did get it all back. At the end of the day the stories the same: old men and wide eyed youth, it’s easier to tell them a crock of shit then it is to tell them the truth, drug and alcohol lie! Addiction kills! And life is short.

An introduction to No More Secrets